Popular Modifications For Rifles And Handguns

by wbstadm
in Best Rifle Scopes
0

For gun owners and firearm enthusiasts, making upgrades to handguns and rifles is a great way to boost performance and enhance the overall shooting experience. Avid shooters are always finding ways to become better, faster, and more accurate by investing in upgrades that will make a difference.

If you’re considering upgrading your gun, here are some of the most popular modifications and essential additions to make to your favorite firearm.

Adding optics to your handgun is an excellent way to improve shooting accuracy. It is also one of the easiest and most affordable ways to upgrade your gun. Most handguns do not have an optimal site if you buy them new. However, there are several sites on the market that will fit perfectly and work with almost every gun.

These optional sites have fiber optic points that are good for every type of lighting and shooting scenario. When used correctly, you will improve your target alignment and begin to see a change in your accuracy. If you’re unsure of which one to get, it’s always best to talk to an experienced retailer who can describe the benefits of each site and their pricing.

Anyone who has been shooting before knows about recoil. When the bullet is propelled forward through the gun and out of the barrel, gases are released and the bullet is projected forward. This acceleration also creates a rearward thrust commonly referred to as a “kick.” This recoil action varies in intensity depending on the type of firearm and the force of the projectile.

Compensators are a popular gun modification because they help to reduce recoil by trapping gases in expansion chambers and redirecting them. By doing this, the shooter doesn’t feel as much of a kick when firing the gun, which can ultimately improve shooting speeds. The compensator will generally attach to the end of a barrel. 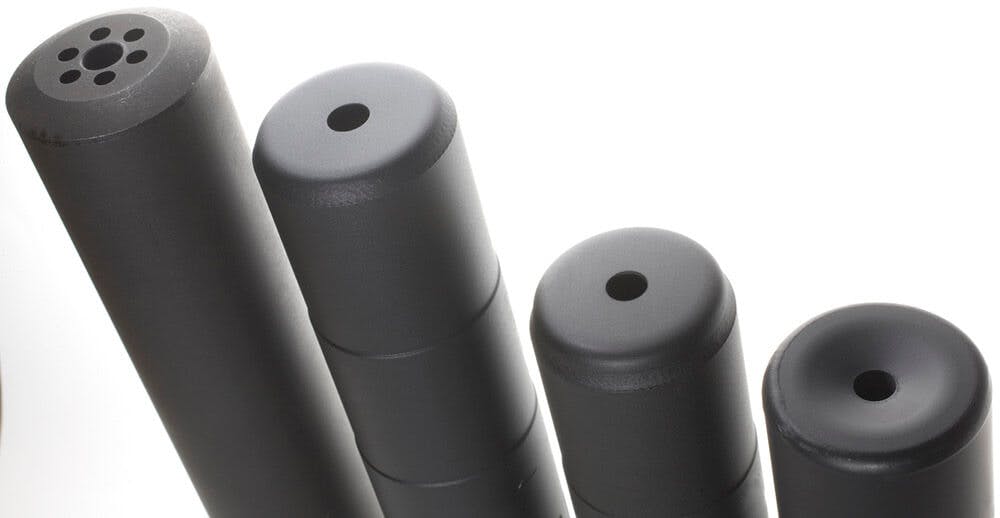 Even if you don’t regularly shoot handguns, you might be familiar with a gun suppressor. You often see them in action movies featuring guns when the shooter must remain discreet or unnoticed. Gun suppressors are designed to lower the noise emitted from a gun when being fired. It can drop the noise level by 30 decibels depending on the type of gun and suppressors!

There’s a reason you see shooters at any outdoor or indoor shooting range wearing protective ear gear. Shooting can be loud—ready loud—and it will damage your hearing over time if you don’t protect your ears from the noise. Suppressors are a great way to protect your hearing while also reducing recoil (they also redirect gasses like compensators)

For many shooters, the grip that comes with their gun is great and there are no issues. However, others may want to swap their grips to improve the feel and finish of how they hold it. Grips are available in a variety of styles and materials, so you’re sure to find one that fits your preferences and budget.

For those who are unfamiliar with how to change a pistol grip or any other type of firearm grip, seek guidance from a professional before trying to install it. Also, you never want to force a grip when it doesn’t fit. This could lead to potentially dangerous situations.

If you don’t want to swap out an entire grip but would like added texture to help you hold the gun more firmly, stippling is the way to go. Stippling adds small textured grooves to the gun’s grip so that shooters can avoid slipping when handling the gun, including while shooting, loading, unloading, and cleaning the firearm.

No two shooters are the same. Some have bigger hands, better grips, or just feel more comfortable with certain firearms than others.  A magazine well is a great modification for handguns if you have larger hands and find that it interferes with your reloading times. It’s also one of the most affordable ways to upgrade your firearm.

So, how does it work? A magazine well, also known as a “magwell” to seasoned shooters, has a flared opening at the bottom that helps guide the magazine to where it needs to go. Shooters find that they can reload quickly with less downtime when using a magazine well.

Of course, there are other modifications that are not considered legal—and for good reason. Some gun modifications can result in the firearm becoming unstable, less reliable, and much more dangerous to anybody handling it. Here are illegal gun modifications you should avoid:

It’s important to remember that firearms are not toys. They are carefully designed by expert craftsmen and manufactured under strict guidelines. Making drastic changes to your gun can compromise your safety and the safety of those around you. If you’re unsure of what you’re doing, it’s always best to talk to an experienced firearms handler or professional shooting instructor for guidance.

Get Comfortable With Your Gun

The only way to know if you need gun modifications and which upgrades to do is to use your gun. By shooting your firearm and becoming more familiar with it, you’ll know what you need to do to make improvements. Consider taking classes at a gun range, signing up for fun shooting experiences, and talking to other gun enthusiasts about their gun upgrades. Before long, you’ll have sculpted your firearm into the perfect gun for you.

Source
Popular Modifications For Rifles And Handguns is written by randerson for www.therange702.com

Pfizer’s COVID-19 vaccine becoming mandatory for all US troops